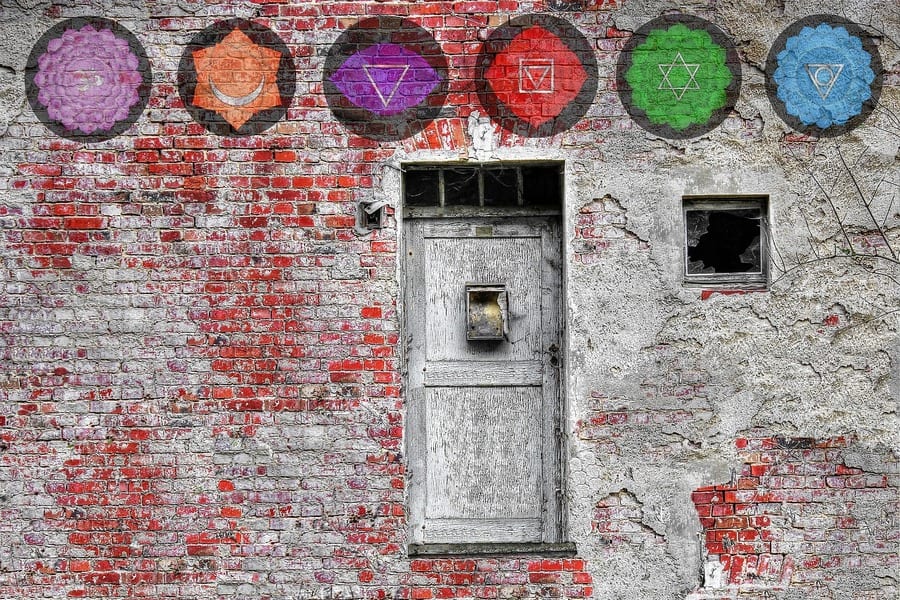 You may already be familiar with chakra symbols and realised they have some geometrical shapes. But, do you know that there’s a deeper meaning behind each of the chakra’s geometrical shape?

The geometry of chakras is the geometry of the Universe. The chakras’ geometry can help you align and raise your Kundalini energy from the bottom of your spine to the top of your head to reach universal consciousness, which will enable you to reach your full potential in your physical form.

The geometry of the universe is presented through the chakras. Each chakra has a particular geometrical shape, representing the journey through the physical energy centres in your body and how they converge with each other.

Use the chakras to raise your Kundalini energy from your root chakra to your crown chakra, connect with the universal wisdom and reach your full potential.

In the Ayurvedic tradition, the energy in the body travels through 72000 channels called Nadis.

These energy centres have constant energy flowing through them.  The free flow of energy through the main channels Ida and Pingala can make your chakras flourish.

Now, you have a better idea of why chakras are the energy centres in your body. Chakras always have energy flowing through them.

Chakras are in an optimum and healthy state when the right amount of energy flows through them. When too little or too much energy passes through the chakras, they can get out of balance.

All living things have a chakra system. In humans, the chakra system consists of 114 chakras; 7 are the major and more significant ones in the body.

The seven chakras we are going to talk about are:

Each chakra has a particular symbol that characterise it.

This symbol is known as Yantra. The geometry of each chakra has a meaning that can help you understand where a chakra’s power comes from.

What is the Geometry of Chakras?

The geometry of chakras relates to the worshipping of the Divine Feminine or the Great Mother.

The different geometric symbols that represent each chakra have a particular meaning.

Here are what each geometrical shape in a chakra symbol means:

The main colours used to make these geometrical shapes in the chakra symbols are white, red, and black.

The geometry of the Root chakra

The root chakra has a geometrical symbol represented by a downward pointing triangle, surrounded by a square. These triangle and square are contained within a circle, which is surrounded by four lotus petals.

What does the geometry of the root chakra means?

The root chakra geometry represents your connection with the ground, with the Earth. The root chakra is the base of our vital force and where the Kundalini energy lies dormant waiting to rise through the chakras.

The Geometry of the Sacral Chakra

The sacral chakra is the second chakra. It’s known as Swadhistana in Sanskrit, and it’s located below the navel in the genital area. The water element governs the sacral chakra.

The sacral chakra is the centre of your creative energy, your relationship with others and your sexuality.

The sacral chakra is represented geometrically by 3 circles, one inside of the other and 6 lotus petals surrounded them all. The three circles represent the manifestation of your creative energy.

The positioning of the three circles creates another shape, that of a crescent moon. This crescent moon represents constant change.

The moon governs the feminine energy, the water element, and the energy from the sacral chakra. The water element gives you the fluidity, movement and aliveness.

This transcendence relates to the cycles of birth, death and rebirth represented by the circles.

The Geometry of the Solar Plexus Chakra

The solar plexus chakra known as Manipura in Sanskrit is the third chakra along the spine.

The solar plexus chakra is located above the navel, and the fire element governs it. The qualities of this chakra are power, determination and activity.

The geometry of the solar plexus chakra consists of an inverted triangle, surrounded by a circle with ten petals around it.

The triangle is surrounded by a circle that represents the manifestation of your inner power and determination.

The ten lotus petals represents the pranas and apanas present in the body.

The Geometry of the Heart Chakra

The Geometry of the Throat Chakra

The throat chakra is in charge of your self-expression and communication of your truth.

The geometry of the throat chakra consists of a small circle engulfed in a downward pointing triangle. This triangle is surrounded by a circle,  which have sixteen petals around it.

The pointing triangle represents the feminine energy of Kundalini moving upwards. It’s the energy gaining knowledge as it raises through the chakras to reach the expression of your higher self.

The circles represent the levels of purification that need to be achieved for you to transcend. The elements of the lower chakras earth, water, fire and air get converted to their pure essence. This, in itself, is the symbol of the purification of your mind.

The Geometry of the Third Eye Chakra

The geometry of the third eye chakra consists of an inverted triangle surrounded by a circle. The apexes of the triangle touch the circumference of the circle. Connected to the circle, there are two petals, one on the left side of the circle and one on the right side.

The inverted triangle represents the connection of the rising Kundalini energy reaching towards the divine.

Up to this point, the Kundalini energy rising through the chakras is time-bound. After the third chakra, you are beyond time.

The Geometry of the Crown Chakra

The geometry of the crown chakra consists of a circle surrounded by a thousand petals lotus. Here is where the Kundalini energy merges with Shiva to achieve liberation of human bondages.

The circle represent the purification you went through with the previous six chakras. From this point, you are ready to reach transcendence and merge with the infinite.

The moon also represents the full moon and the awakening of the conscious mind.

The thousand petals lotus represent the connection with the Divine, with the Universe.

Once you managed to awaken all your chakras and reach the crown chakra you become one with the universe. You transcende the cycle of birth and rebirth and entry into a state of bliss known as Samadhi.

Here you won’t have any more feelings, desires, or emotions in your mind.

Hopefully, you got an idea of the geometry of each of the seven chakras. The chakras have a simple geometry of triangles, circles, hexagons and squares. The meaning behind each geometrical shape is an ancient knowledge that can help us better understand each chakra’s qualities and powers.

Once you can understand these qualities, the chakras’ mysticism is no longer a mystery, and you can start making sense of the way they work.

What are the 7 chakra symbols?

The 7 chakra symbols are yantras or geometrical shapes that have a particular meaning for each chakra.

What chakra is Om or Aum?

Aum is the mantra for the third eye chakra and for the crown chakra.

What are the 7 Chakra frequencies?

What are the 7 mantras?

How many lotus petals are in each chakra?

Where is Kundalini located in the body?

Kundalini is an energy that lies dormant at the bottom of the spine. Once you clear the Ida and Pingala channels, the Kundalini energy can rise through the Sushumna Nadi. Then you can achieve a higher level of consciousness.