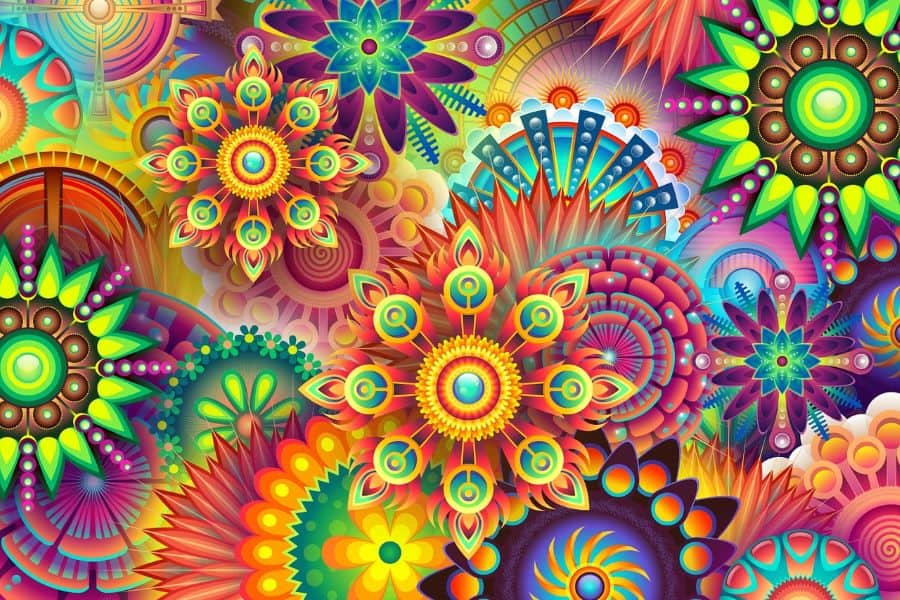 Mandalas are probably the most common symbol in a yoga studio, Hindu clothing or in nature. But do you know what are mandalas, and how do they work?

Mandalas are drawing representations of the Universe. Mandalas symbolise the totality of existence and the connection between your inner-self and the Cosmos. Drawing a mandala becomes the expression of your spirit and your innermost desires. A mandala is the portal of entry to the spiritual world and your true self.

Mandalas have become very popular among the yoga world and Hindu fashion. They portray a beautiful array of shapes and colours. But mandalas are much more than that. They have a deep-rooted spiritual practice link to them.

Mandalas are drawings, diagrams or models that represent the Cosmos, the Infinite and the Universe. A mandala symbolises the totality of existence.

A mandala is a representation of all the forces in the Universe that create it and make it what it is. A mandala is the entrance to discover the spiritual world.

When you draw a mandala, you do a visual representation of your inner and outer worlds.

You can use different materials to make a mandala. A mandala can use various media in its construction such as paint, cloth and sand.

Some traditions will make mandalas utilising a circle that is bounded by a square with four entry points that lead to a central image. The central image represents the goal of the practice- self-realisation or enlightenment.

Just be careful not to confuse mandalas with another similar geometrical forms, yantras.

There are three principal translations of the word mandala.

The first meaning of the word mandala derives from an ancient Sanskrit word that means “container of essence”. ‘Manda’ means essence, energy or spirit, and ‘la’ means ‘the container of’.

The second meaning of mandala comes from the word ‘mand’ which means to draw and ‘la’ that also means a sacred centre. Here, a mandala means a holy centre.

The third meaning comes from the Buddhist traditions, where a mandala means something that rounds a circle or the periphery of a circle.

A mandala commonly refers to a pattern of visual images that represent the relationship between your inner and outer worlds.

The meaning of a specific mandala depends on the geometrical shapes. Usually, people dedicate mandalas to goddesses and deities with different powers. So by drawing them, we call on those powers to come to our life.

These are the meanings of the geometrical shapes in mandalas:

What Do Mandalas Represent?

Mandalas are found around the world symbolising a sacred space. Mandalas represent the human journey to self-realisation. Mandala drawing becomes a journey of connection with your inner self. A mandala invokes a deeper connection with yourself and the Universe.

Mandalas can be a spiritual tool to focus your attention. For this reason, it’s used in meditation to help to connect with yourself and the Universe. The mandala you draw can potentially symbolise your inner desires of what you want to achieve in life.

In general, a mandala starts at a focal point, usually at the centre with a dot. This dot can represent a deity, or it can become a purely geometric form with lines drawn from the centre to the corners.

Mandalas can have many various forms, most commonly mandalas are made in circle forms, but can also be square. Mandalas in yoga studios help students to connect with both their inner self and the Universe.

Where Do Mandalas Come from?

Different traditions and religions around the world make use of mandala-like images. Some meditative disciplines use visual images to focus the mind.

How to Draw Mandalas?

To make a mandala, you start by placing a dot at the centre. This point means the seed, the starting point from which all other energies will unfold.  During the mandala drawing, your energy merges with that of the Universe. You become one with the creation.

When you move from drawing one point onto drawing a line and other lines, those lines will intersect and form a geometrical shape.

Drawing a square symbolises the four directions of the physical world. As you continue your mandala drawing, you create layers, like onion layers, from the centre to the outer circle. These middle layers represent levels of your physical life. The most outer layers of a mandala become your spiritual realm.

Each colour and shape of a mandala has a meaning. You don’t need to intellectualise and choose every part of the mandala. You only need to let go and flow with the mandala’s energy and see where it takes you. Let the drawing connect you with your inner self. Let the mandala to draw you into the infinite wisdom of the Universe.

Architectural mandala, this mandala bases the building structure in a central pole around other conical shapes, such as Tibetan monasteries, some mosques, churches and cathedrals. This central pole represents the axis of the world.

Sand Mandala is common in the Tibetan Buddhist tradition. This type of mandala is made by four monks who make a single sand mandala. The mandala is divided into quadrants, and each monk makes one quadrant. This square has four gates which form a T shape.

The meaning behind the destruction of a mandala is a reminder of the impermanence of things in the Tibetan Buddhist teachings. Then the sand is poured over a nearby water body to distribute the positive energy created during its drawing.

Mandala drawing apart from being used to relieve stress, helps you to connect with your inner self.

Here are some benefits you will experience from drawing Mandalas:

How Do Mandalas Work?

When you draw a mandala, you are representing your inner journey of self-discovery. You can draw mandalas to express your feelings. A mandala becomes your self-expression.

There are no restrictions on how to do a mandala, which type of paper to use, nor which colour you use to paint it. Most mandalas have a circle shape, but there are other geometrical forms used.

All mandalas follow a symmetrical pattern. Usually, you can make any mandala, but as a sacred drawing. You should have an intention when drawing a mandala. Focus on this intention during your drawing.

When you draw a mandala with an intention, the first dot you draw is your focal point from which every layer unfolds.

Your intention travels through the lines and colours as you draw. It is like a moving meditation for your hand and eyes.

You create a world that only you feel and know. Your personal life will expand, empowering you to do what you want and be who you want.

Now, you have a better understanding of what mandalas are, their meaning, how to draw them and how they can bring benefits to your life.

Mandalas are a beautiful addition to your meditation, yoga, pranayama, mantra chanting and in your spiritual development.

They can be a beautiful decoration at home and at the same time bring the space together in harmony and to hold your spiritual practice. You can also use mandalas as a means of self-expression and as a way to unfold your creative power.

You can learn to listen your intuition and trust your inner self.

Yes, colouring mandalas has an effect that calms the mind. It activates the creative part of your brain and allows the intellectual part that overthinks to be quiet. You automatically relax and focus on the colouring and shape of the mandala.

Mandalas are present in nature, plants, flowers, vegetables, even in crystal formations. In mathematics, these forms have been called fractals.

Why Are Mandalas Destroyed?

Mandalas are sometimes destroyed to remind us of the impermanence of life in this world. Everything, no matter how beautiful it may be, will be destroyed one day. So, we must learn to enjoy the process and the connection we have with ourselves during that process.

When Are Mandalas Used?

Mandalas are used in spiritual traditions as tools for meditation and prayer. You can use a mandala to focus your mind and connect with your inner self and the Cosmos.

Which Cultures Use Mandalas?

Colour provides an extra layer of meaning to the mandala. Each colour can have a purpose so that it can give you a glimpse into your subconscious.

What Is the Purpose of Mandalas?

Mandalas aim to connect you with your inner self as part of the Universe. To recognise that divinity and expand it to the whole existence.

Do mandalas Have to Be Symmetrical?